The Films of Charles and Ray Eames

I have just watched a prototype of real life in 1957 made by toys. “Toccata for Toy Trains” is a short film by Charles and Ray Eames. The film is an interesting look at the world of toy trains, shot from the perspective of the little world itself. Although there are music and speech, this is a visual motion picture – it should be seen.

All details in the movie are expressed incredibly precise and that makes it very colourful and lively. In some moments the camera is very close to the objects and shows motion of the trains from different angles. It is amazing how dynamic and how full of life this film seems although it was made more than 50 years ago. The way of moving of the toys is great. Despite repetitive nature music contributes for that brightness too.

The film is very interesting, but only in the beginning. After that it looks as if go on forever. Scenes are different, but they show same things and motions and from one moment onward I was quite bored.

Watching the film for one split second I felt like in time-back machine. First because it displays life in olden times. Second contemporary motion pictures are entirely digital, made by 3D programmes and all kind of software.

I was very impressed by the documentary short film “Powers of Ten”, again from the collection “The Films of Charles and Ray Eames”. It begins simple with a view of a couple picnicking in park, but after that shows us everything beyond that we can see indeed. First, every 10 seconds it was zoomed out untill was reached 10²⁴ meters or 100 million light years distance and second, the same but in the oposite direction. I have never considered for scale in this way. I have never thought about how there are millions fragments in my body and at the same time how extremely insignificant it is in the universe. The film expresses that in one simple, but brilliant way and probably this is the best explanation of importance of the size. 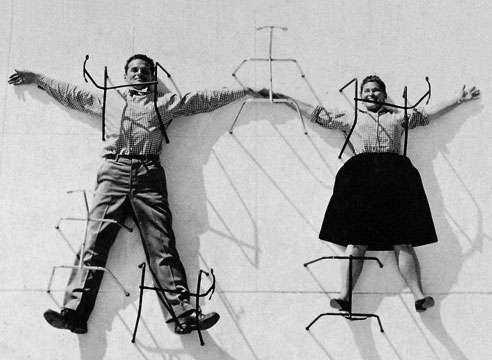