My Gallery Visits started with “Haunch of Venison”. There were three different exhibitions: Frank Stella – “Connections”, Bae Se Hwa – “Steam Series” and Edward Barber & Jay Osgerby – “Ascent”. I visited them twice. First time I wasn’t alone, I was with my classmates and I just walked around, took some pictures and observed. But the information was too much to can digest it with one glance. So I decided to come again next week. My second visit was observation in depth, I took more pictures and also made some sketches and took notes. 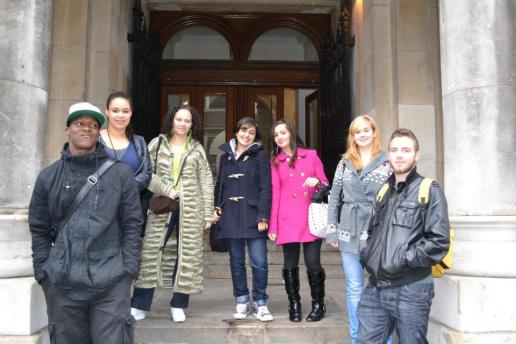 That was very interesting exhibition for me. First I want to tell my impressions about Edward Barber and Jay Osgerby and their “Ascent”. I red for these people that they are two of the most innovative designers working in Britain. Their work for “Ascent” is inspired by the structures and forms of moving craft. The idea’s origin lies far in their past. Osgerby grew up near to a Royal Airforce and Barber was sailing as a child. 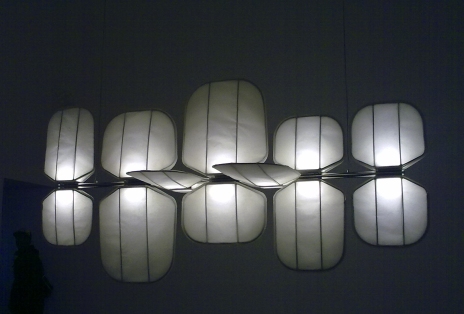 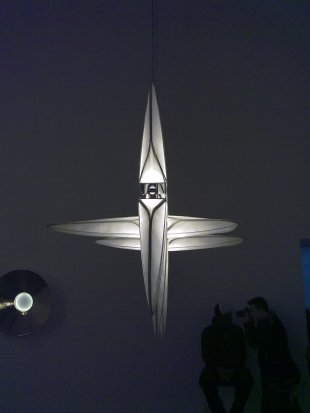 Their work is very clean. Even if the name of exhibition was diverse, when people see their pieces they will think about flying and sky. The shape of the devices resembles to something between plane and ship. And maybe that was their purpose, because in this way their project includes parts from both and legacy from their childhood. As a whole it looks more as a plane, but the separate elements are more like sails. Hanging in the air as a huge chandelier was extremely suitable. I can’t imagine these pieces just to be placed somewhere on the floor immovably. They look so light and soft and, in my opinion, the white colour and the lights also help for this feeling. Especially I was impressed by the lights. I think they give a life to these creations. Actually they are not so complicated as a structure, but their performance is excellent and exactly that makes them artwork.

There is one detail which looks unimportant at first sight. However, I’m not sure that is right. In my opinion, this exhibition was presented in Mezzanine Gallery &Senate Room deliberately. Because this room has two entrances – one with view from down and one showing almost bird view. I think this is again connected with air and water, because from the ground the devices seem more as a vehicle from sky, but from up they are more as a top part of a boat. 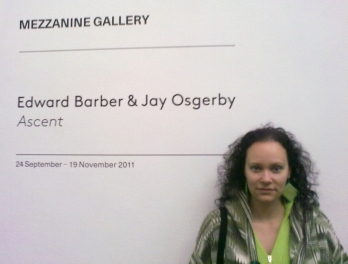 One curious fact was that the artists submitted not only their project, but also their sketches and minimodels. It was interesting to examine how this idea had developed untill the final composition. For me as a student and prospective designer is essential to learn this path – the process of creating and after that when I have enough knowledge and experience to create my own way.

Bae Se Hwa and his “Steam Series” was established in West Room. The artist is 31-years old furniture designer based in South Korea. An exact opposite to dynamic forms and strong colours in Frank Stella’s work and movable devices of Barber and Osgerby, this exhibition expressed calm and static. Hwa’s pieces were very elegant and a little misterious. He used curved linear elements to create his samples and everything was made of wood. When I was reading later for this series one interesting quote caught my eye “The author demonstrates the flexibility and beauty of wood despite its solidity, and show that this material can be shaped to harmoniously embrace the natural curves of the human body.” I noticed this phrase because during the exhibition three main things made me impression. 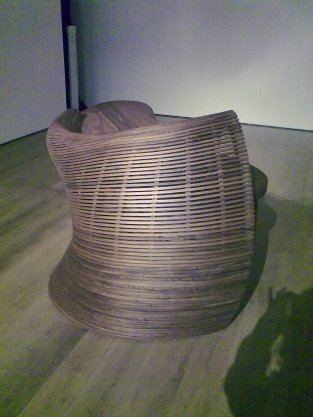 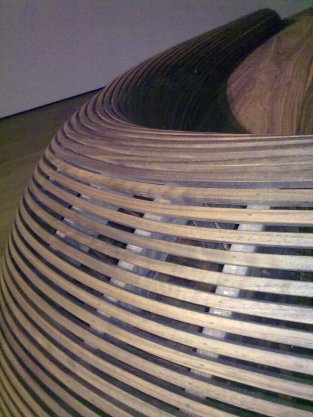 First point – I didn’t expext to see furniture. I expected paintings or sculptures, even some useless objects, but not something so practical and worthy. When I came in the room I spoted a lot of details before to realize that these pieses are actually furniture. I was impressed especially by the big desk. Its form and structure were so natural and when I touched it, I felt life in it. It is not just a dead object, it owns a soul.

Second part was the shape and material. It is impossible to not be captivated by these organic forms. If I have to descibe them, maybe the best juxtaposition is that they look as if convey lyrics or soft music. In addition I noticed that the design is absolute clean and simple, with no details and ornaments. In my view, exactly that and the wood material with its natural colour make this objects express this calmness and relaxation.

The third thing was the light. The light in this room was soft and not very strong and additionally helped creating the amazing atmosphere. Honestly, in this gallery I felt as if I was in spa centre. My second visit continued a lot of time contemplating these pure shapes and after that I felt so calm and rested and also full of energy.

Despite all positive aspects of this art, I’m not sure that as furniture these benches are very comfortable.

Frank Stella’s “Connections” was the most extensive exhibition in “Haunch of Venison” during my visit. There were examples of his work throughout all his long and variegated career. That included works from 1958 until the present day.

Frank Stella is a very famous and influential American artist of the last 50 years. During this time he has reinvented himself continually and has never stoped seeking new challenges. That was obvious and from the exhibition. “Connections” portrayed a selection of diverse projects of two and three dimensional work in broad thematic, explored in different colours and made from various materials. This art was also presented with plans and sketches.

Frankly, this was my favourite exhibition in this gallery. I was very impressed by “Steam Series”, but “Connections” was surprised me and made me admire to Stella’s courage to accept new challenges and to try developing his creations and making them more complicated, realistic and alluring. Also I was inspired by the details and some of the colours, particularly in his more contemporary work.

This piece has been made by stainless steel tubing and carbon fiber. It is a huge sculpture. Stella used diverse forms for this object – long curved pipes and also short straight lines. It seems a little chaotic. The silver colour expresses coldness and immobility, but the shapes show motion and speed. 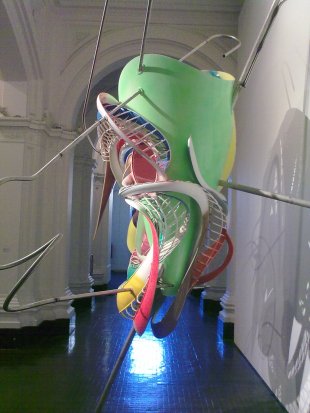 This is one of contemporary work of Frank Stella and is from his private collection. Unfortunately my camera is not good to show beauty of these colours. The astist used only strong colours – red, yellow, green, blue, but in very appropriate combination.The aerodynamic shape conveys message to the future. This sculpture left feeling of eternity in me. It looks as a cycle which never stops. Maybe because of that I resembled this figure to an endless net or a heart.

I red that Stella was inspired by Kandinsky and with his contemporary work he recall the painterly abstraction of the great artist. Stella himself calls him “defining creators of 20th-century abstraction”. 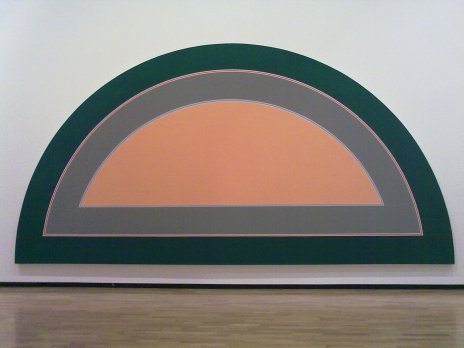 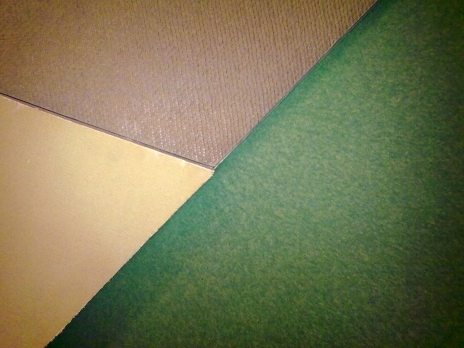 That are pieces from the author’s earlier period. First two examples are painted on canvas and the third one is mix of oil, fabric and cardboard collage on wood panel. He started experimenting and using different techniques very young. I saw a lot of angles and geometric forms. His early paintings are as a portrait of some mathematical formula. I like the asymetric shapes, but I don’t find Stella’s previous work so inspiring as his new models. Maybe for their time they were topical and modern, but at present day they seems a little rough. However, I admire that the artist began thinking in 3D dimension so early. In my opinion, exactly his adventurous character has brought him a lot of successes during the years. 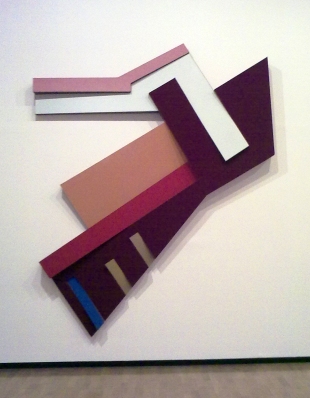 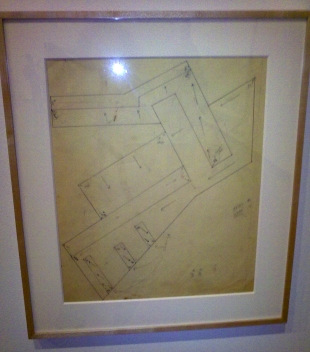 Many times Frank Stella has been asked why he creates paintings in relief. One of his responses was that he wants to give actual depth to his art instead of some false illusionistic manner of creating depth. “Suchowola” is an exact example. This was again a 3D painting, but in three variations. Some of layers sit further forward, some backward. First version was in light colours (green and yellow). The shape again consisted of a lot of irregular polygons. The form was the same in the next two versions, but with colours sitting on different levels, and finally some of planes were tilted forward, so they sit at angles to others. And this is the reason for me to like mostly the last piece – its emphasized depth.

There were not only the diverse variants of this creation, but also sketches, scheme with dimensions and wood minimodels, some of them 3D.

A complete dive into three dimensions was in the next room, where was placed “La penna di hu” (1983-87). This is a sculpture, no longer a painting and Stella used different objects and shapes to make it. There were cones, tubes, even something looked like a Soviet sickle. These pieces might seem like nothing new – sculptors have been working in 3D forever, but his work became more complicated and modern. It is obviously that the author was developing his skills and imagination and the process of transformation from painting to the new approach to sculpture was successful. There were still paintings and drawings of “La penna di hu” which had almost a weird desire to show that, having captured painting in sculpture, sculpture can be captured in painting.

Athough it was still rough, I liked this work. It was something alluring in these chaotic and asymmetric shapes. I was mostly influenced by Maquette for La penna di hu (The Peacock Feather), that were two versions made from thick paper or stencil and ink of foamcore and these examples were only in black and white. One piece was with white background and the another with black. I remember them because they were very clean 3D models showing every details from this masterpiece. Some of other versions were too colourful and people can not enjoy to the shapes.

The light in room was strong enough and I could observe shadows on the wall of each models. It was interesting, because there were a lot of variations of “La penna di hu” each made from various material as wire frame construction, wood, aluminium, fibreglass, stencil, etc.

All of these pieces made my mind hum and my eyes hurt me. All these bright stripes and squares were a little boring for me. I understanded his idea about different colours, how they change when they are next to some other colours, how reflect to human eye and mind, especially presented in rectangular forms. However, this endless combinations of schoolkid colours were too repetitive.

I made a sketch to this work because that is the best way to catch the logic of arrangement of the colours and lines. At first sight it wasn’t obvious, but this painting was also asymmetric as a big part of his art.